In 1979, Mr. John Connolly started Martial Arts training in Kodokan Judo under Sensei Yakata who was a US National Gold Medalist in Judo during the early 1970’s. Mr Connolly competed in numerous  tournaments throughout the 1980’s and won first place in the East Coast Judo Championships, Empire State Games, Kokushi Dojo, the Senator’s Cup, etc., in the 1980’s. In 1988, his dojo closed due to financial issues. From 1988- 1992, Mr. John Connolly trained and competed on the Lehman College Judo Team and competed on the College level.

In the late 1980’s, after a desire to improve his Martial Arts training, Mr. Connolly started Taekwondo training and kick boxing under Master Paul Berisha, United States Kickboxing Champion. (1988-1993) The school was taken over by Master Jerry Fontanez in 1993 who instructed and coached students in American Sport Karate. Mr. Fontanez was a Natl. Champion in American Sport Karate. Mr. Connolly continued training under Master Fontanez in American Sport Karate until the school officially closed. In 1998, Mr. Connolly then joined the Throgs Neck Taekwondo Center in the Bronx, New York and learned Authentic, Original ITF Taekwon-Do from Masters Gregory Pennerman, and Bienvenido Tineo. His teaching skills were developed here at the Throgs Neck Taekwon-Do. He voluntarily instructed Taekwon-Do and Judo each week at the City Island Community Center and the Throgs Neck Taekwon-Do Center until retiring from NYPD and relocating to Florida with his family in 2013.

Mr Connolly also trained each week for (4) hours every Sunday with GM Kwang Duk Chung, Taekwon-Do Pioneer from Argentina, outside in Saxon Woods Park in White Plains, New York. (April 2010-2013). Mr Connolly competed and won gold medals in both WTF tournaments such as Hong-IK and ITF Taekwondo tournaments such as the ITF Liberty Cup and Grandmaster Hwang’s Cup.

In Jan.‘1993 Mr. Connolly was sworn into the New York Police Dept. and was promoted to Sergeant in 1998 and Lieutenant in 2001. After personally experiencing the attacks on Sept. 11, 2001, where John Connolly was a Special Operations Lieutenant assigned to lower Manhattan he voluntarily formed and was elected President of the NYPD Martial Arts Club in an attempt to help Police Officers deal with and relieve stress through the Martial Arts. This club was recognized by the Police Commissioner’s Sports League. He was re-elected each year until he retired in Dec. of 2013. In 2004, Lt. Connolly was assigned to Integrity Control for the NYPD Firearms and Tactics Section where he became a State Certified Firearms and General Topics Instructor. Lt. Connolly also competed in numerous Law Enforcement Judo and Taekwondo competitions and won matches in the World Police and Fire Games, and won a gold medal in the the International Law Enforcement Olympics.

Mr. Connolly was the appointed the Chairman of the Umpire/ Referee Committee for Grand Master Kwang Sung Hwang’s Cup in 2007. During his off duty time besides running the NYPD Martial Arts Club he voluntarily started a Martial Arts Program in a Community Center in the Bronx, New York, and now voluntarily teaches Martial Arts to young men and women and Law Enforcement members in Florida. Mr Connolly is proud to say he never made any money teaching and/or promoting the Martial Arts.

Mr. Connolly is proud to be a life member under the leadership and guidance in the United States Ju-Jitsu Federation of Shihan Bruce Bethers. Shihan Bethers is a retred US Army Lt. Col. and 8th Degree Black Belt Master Ju-Jitsu Instructor.

MARTIAL ARTS PHILOSOPHY- UNDERSTANDING THE DO

I enjoy discussing the philosophy of the DO, or in my opinion the way to a better, happier and healthier lifestyle. Today, due to the sport aspect of the Martial Arts many practitioners practice only the physical aspects of the Art.  I am writing this in an attempt to discuss the mental and spiritual benefits the Martial Arts offers to its modern day practitioners. I believe if we apply the Do throughout our daily lives we will help contribute to achieving the ultimate goal of the Arts which is committing ourselves to self improvement leading to a more peaceful world.

Before we can discuss the benefits of living the DO in our daily lives, we must be able to understand what is meant by living the DO. The DO defined as “the way”, encompasses philosophy, morals, ethics, humanity, and training your state of mind. This mental training will help the Martial Artist elevate his or her spirit.  The study of traditional Martial Arts involves an equal balance of physical, mental and spiritual aspects.

The DO is mentioned and practiced all over the world throughout history. Knights practiced Chivalry, and Samurai trained in Bushido. Knights would behave according to chivalry, because those individuals that possess the authority to take lives require a stricter moral code of conduct than other professions. Knights were responsible for protecting the vulnerable. Bushido placed honor as most important above all else. The term Samurai actually means “to serve”. The Samurai Bushido code stressed loyalty to their Master, filial piety and reverence to the Emperor. The tenets of Bushido were frugality, loyalty, mastery of martial arts and honor to the death. In Japan, DO is used as a suffix in Karate Do, Aikido and Judo. In Chinese, Tao means the “Way of”. Living the DO everyday should be viewed as a better way of life. The attacking and blocking tools that we train, and forge can be deployed as weapons and are readily able to take a life easily, if needed. Therefore, like the Knights and the Samurai we must also adhere to a strict moral code of conduct. This code of conduct is known as the “Way of the Warrior”. Similar codes of conduct have existed for other warriors throughout history.

Some Martial Arts Instructors are more concerned with acquiring medals and trophies from competitions to build fame and fortune. Focus is lost on developing the student into becoming a more peaceful, and productive member of society. This is unfortunate.

How can these important values be useful to home and careers in today’s world?

We must stay focused, act responsibly, and feel free to question some of the values and virtues that are taught today. Once we are confident that these values taught are beneficial for improving our way of life we must continue to live honorably so that these virtues are never destroyed. This philosophy of Martial Arts should be applied to every aspect of ones life.

If we make every effort to improve our mind, body and spirit we will become closer to the ultimate goal of building a more peaceful world. As Martial Artists we must always treat others with the utmost courtesy and respect. This is our code of Honor. Living this way in our daily lives will not only lead us to a path of enlightenment, but it will contribute to the goal of creating a more peaceful world.

We must stay focused in our daily lives, only then we are able to successfully “live the DO”, which is an honorable lifestyle. Honor can be described in many ways. In essence, it is having respect for yourself and showing the utmost respect for others. Honor is applying 100% to whatever task you undertake, and not letting anyone including yourself down. It is always doing the right thing, and standing tall against any injustice. It is being honest, treating others with dignity and humanity and keeping your word. Without strong morals and ethics we cannot claim to be a Martial Artist.. We must try to devote our entire life to a strong sense of integrity, responsibility, and justice.

As we advance in age we compensate for our lack of agility with the great wisdom we have developed. This wisdom helps us achieve the balance that allows us to execute our techniques using less physical energy. Martial Arts training should include training our state of mind. Training our state of mind will elevate our spirit. Only then, we will feel like we are in harmony with ourselves. What I am trying to say is when our intellect is at rest; our inner self (subconscious) is wide awake. This type of mental and spiritual training forces you to take an internal voyage within yourself. One of the greatest benefits of training in the Martial Arts is learning how to breathe correctly. For the most sincere student breathing connects us with the beauty of nature. The correct way of breathing helped me deal with the daily stresses of my job as a Lieutenant in the New York City Police Department. In 2001, I founded the non-profit NYPD Martial Arts Club, because I strongly believe the Martial Arts teaches both self-defense and harmony.  This is extremely important for members of Law Enforcement and the Community we serve. I voluntarily taught and still teach the benefits of Martial Arts to my fellow officers, to do my part in society of building a more peaceful world. The Do is a lifelong journey, an ocean with no horizon. Living the DO means displaying a positive attitude and maintaining a lifelong commitment to understanding the Do. This lifestyle should be applied in all aspects of our daily lives. This cannot be taught. I tell my students an Instructor can only provide guidance to the student. We must choose our own path or way. 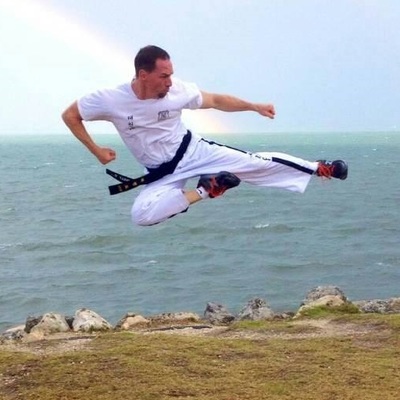 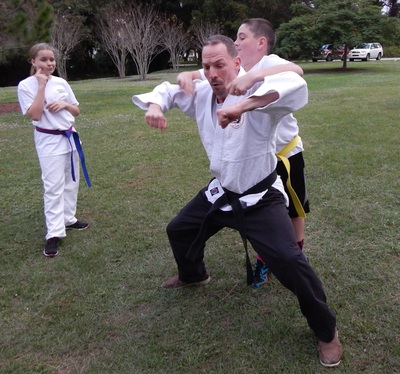 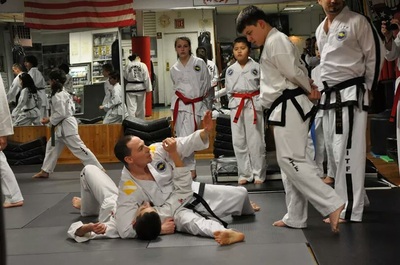 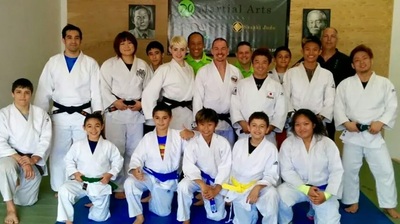 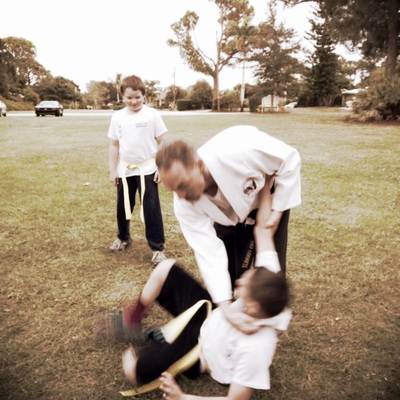 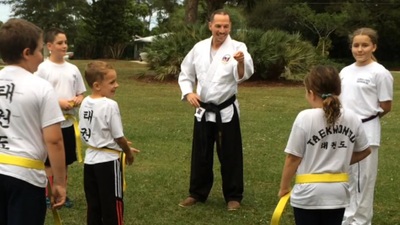